The March meeting of the Basingstoke Light Blues Club, at which Bro Colin Williams gave a superb talk on the subject of Formula 1, was a great success. The raffle raised a magnificent £275 towards our speaker’s chosen charity, which in this case was the Hampshire & Isle of Wight 2016 Festival in support of the Royal Masonic Trust for Girls and Boys. Demand for this one was so high within the province that a re-run has already been pencilled in for later this year. Watch this space, F1 fans! 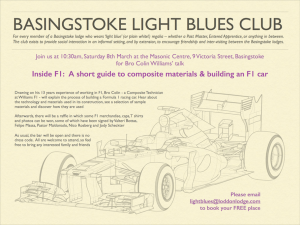 We're pleased to confirm that W. Bro David Stiles' talk about his experiences as a wartime evacuee will go ahead as planned this coming Saturday 16th March. Entry is FREE - those wishing to attend should please... facebook.com/loddonlodge/po…

With apologies for the very late notice, please be advised that this evening's meeting of the Standing Committee, and the Lodge of Rehearsal which follows, are both cancelled due to bad weather and the resulting... facebook.com/loddonlodge/po…

HAPPY NEW YEAR! If one of your new year's resolutions is to visit a Basingstoke lodge, why not come along to Loddon's next meeting? Thursday 10th January, close tyled at 6pm, and the ceremony will be that of... facebook.com/loddonlodge/po…